Leaders of the G20 countries agreed during a weekend summit to introduce a global minimum tax on corporate profits at 15 per cent. The aim is to prevent the resettlement of multinational corporations into tax havens.

The minimum tax rate for corporate profits is expected to be in place from 2023. This was agreed by representatives of the G20 countries, which includes 20 of the world’s strongest economies. “This is not just a tax deal. It’s a diplomatic reshaping of the global economy and its return to the people,” US President Joe Biden said on Twitter.

The minimum global tax rate is aimed at avoiding the outflow of corporate profits to tax havens. That is, to countries that have a low or zero tax rate on profits and, moreover, have favourable conditions for circumventing tax laws in the states where such firms resettle.

In addition, G20 leaders have pledged to get much greater amounts of coronavirus vaccines to poorer countries. They want to do so so that by the middle of next year at least 70 percent of the world’s population is vaccinated against SARS-COV-2. It is poor countries that are very lagging in vaccination, and are also a risk to economically advanced states. 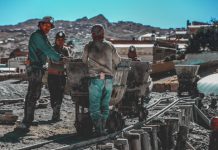